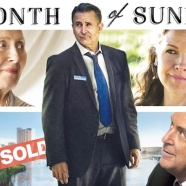 Some films attract critical consensus while others trigger polar opposite opinions like A Month of Sundays (2016). Australian colloquial drama is not for everyone and it takes patience to engage with slow-paced laconic narratives that rely on insider humour for meaning. Aussie horrors and dystopian thrillers are well known but there are few films that stand tall for sensitively exploring the inner world of male emotion. In fact, we have culturally fortified ourselves with a style of Ocker farce to shield us from knowing too much about what lurks within the Australian male.

Lacklustre real estate agent Frank (Anthony LaPaglia) is the quintessential Aussie bloke. He is a poor salesman and has neither the verbal wit or emotional maturity to deal with the double-barrel grief of his recent divorce and mother’s death. By extraordinary coincidence he takes a misdirected call from Sarah (Julia Blake) who sounds just like his mother and the few minutes on the phone fills an emotional void. One thing leads to another, they become friends, and Frank learns to open up on the various emotional fronts of his life. The sub-plots include redeeming the relationship with his son, resolving feelings about his wife and mother, dealing with Sarah’s health issues, and experiencing the ordinary pleasure of being nice to people. It’s a simple narrative arc, but dense with emotional side-tracks and blockages that Frank cannot resolve alone. Themes of emotional estrangement, aging, death and grief are lightened by the deadpan humour exchanged between Frank and his boss (John Clarke) and the constant running commentary in real estate language, a clever device that mocks the Aussie obsession with property ownership.

The filming has many long fixed frames and scenes where nothing happens except what we can infer is going on inside Frank’s head. When he appears to be struggling emotionally, the recurring real estate babble kicks in to punctuate the silence while he retreats into his private world of make-believe sales talk with imaginary buyers. Some critics have panned the film’s central premise and slow-burn plot, but it stands out as a thoughtful and well-acted portrait of an emotionally convoluted archetypal Australian male who survives just this side of clinical depression. Frank is ordinariness personified and not likeable at all, but he is very recognisable in this country. This is an original funny-sad look at a type of Aussie male who should watch this film for their own good.