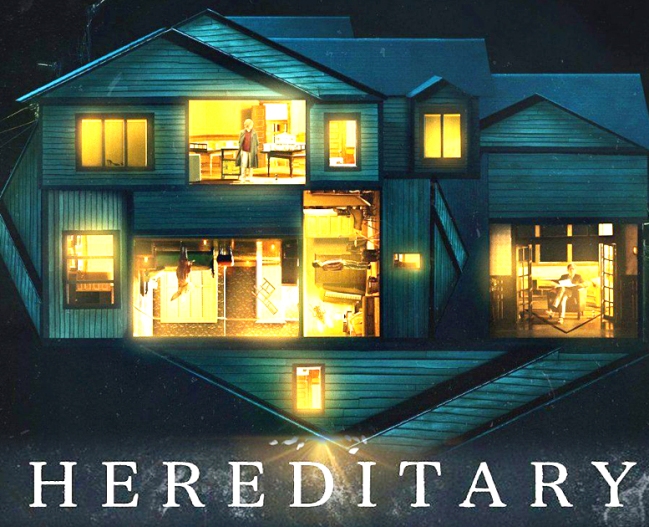 It is ironic that the supernatural horror genre needs to be grounded in realism in order to be frightening. The closer a film moves towards fantasy the less realistic and therefore less scary it becomes. Lauded by some as the horror film of the year, Hereditary (2018)struggles to balance realism and fantasy in an uneven film that will frighten only those who want to be frightened.

This is two films in one: an unsettling and tense portrait of a family psychologically traumatised by deep grief, followed by a bizarre journey into supernatural fantasy. We enter the film at the funeral of a matriarchal grandmother attended by daughter Annie and her husband, Steve (Toni Collette and Gabriel Byrne), and their teenagers Peter and Charlie (Alex Wolff and Milly Shapiro). This is a family with a history of tragic deaths and Annie’s eulogy reflects a twisted relationship with the deceased. As a professional miniaturist, she mentally lives inside a dolls’ house world where she finds control over the chaos of her family life. While dealing with its recent bereavement, the family soon faces one more that is far more gruesome and bizarre. A cascading avalanche of weird happenings makes it increasingly impossible to separate what is real and what is psychotic hallucination.

The first half of the film has all the ingredients of a firmly grounded and brilliant psycho-drama. Toni Collette gives an outstanding performance of a mother on the edge of sanity.  Her emotive range is spectacular. In one scene she shares grief with another mother and the tears were flowing in my cinema, something that rarely happens in this genre. Excellent cinematography captures the transition from high-tension family grief to a place of ghostly atmospherics, but soon we find the inevitable reliance on standard horror tropes. There may be grounds, however tenuous, for the film to claim originality in creepiness but this is outweighed by an over-reliance on headless bodies, wispy floating forms, and other stock shlock.

Whether this is your horror film of the year will depend on your taste for the fantastic supernatural. The attempt to explain a family’s history of tragedy by invoking a ghostly masterplan will be unsatisfying for many. Yet some films in this genre can genuinely haunt you, like the deeply reflective A Ghost Story (2017)that inhabits the terrifying space between death and afterlife, or A Monster Calls (2017) that uses the supernatural to explore fear of death. Hereditarystarts with much potential but settles for the simpler goal of scaring you. These days, fans of this genre expect more.