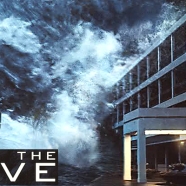 Most tsunami disaster movies are entirely predictable and dependent on computer graphics. It is not a level playing field because big budget films can afford the latest digital effects wizardry and it is unusual to see a small budget film compete on bigger ground. The home-side advantage helps in The Wave (2015), a Norwegian film from one of the more landslide-prone parts of the world. Instead of relying on computer graphics, the film draws on natural scenery, environmental science, and a tightly scripted action thriller storyline to produce a movie that punches well above its weight.

Norway has a long history of massive rock-falls where large boulders fall into rivers, triggering tidal waves that can reach tsunami proportion and wipe out whole villages. In The Wave, Kristian is a detail-obsessed geologist who notices data indicating unusual subterranean movement and he calculates that if correct, a landslide could cause an 80 metre wave that would destroy the town in less than ten minutes. His concerns are dismissed by other geologists who do not want to panic the tourists who are filling the town’s hotel and restaurants. When flocks of birds migrate and seismic warnings get louder, the red button is pushed to evacuate the town. Kristian’s family are in different locations and he must struggle against the panicked exit from town to find them. For a modest scientist and family man, he rises heroically to the crisis and, with typical Scandinavian gender equality, his hotel-manager wife is a heroine to many survivors.

This is all familiar territory for disaster film fans. However, the directing, action pace, and camerawork keep the story moving with very limited reliance on computer graphics. Clever lighting and sound effects keep the terror just out of view, and several rescue scenes are case studies of how creativity can beat big budgets every time. The atmosphere of tension rises to terror in finely calibrated increments, and the few short scenes of the giant wave are terrifying and visually plausible. This is a highly engaging film that achieves much with little. It keep viewers riveted to the screen until the final credits say that Norway believes there is no question if such a disaster could happen, its more a matter of when.