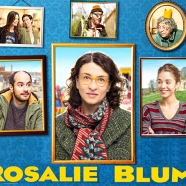 The French film Rosalie Blum (2016) is a low-key comedy that uses whimsical coincidence as a narrative framing device. Whimsy is an old-fashioned term that describes something playfully funny about nothing of consequence. Rather than plot-driven, this story is like a loose jigsaw puzzle of quirky characters whose paths connect by chance and whose lives become entwined.

Part of the whimsy comes from the story being told from three different viewpoints that eventually converge to explain little more than how the paths came to intersect in the first place. Vincent is a balding shy downtrodden 30-something hairdresser dominated by his mother and emotionally still a child. By chance he meets middle-aged shopkeeper Rosalie and is perplexed by the feeling he knows her from somewhere. To fill his empty life, he begins to follow her and she soon notices his stalking. Rosalie asks her niece Aude to follow him to find out what’s going on and she readily agrees just for fun. The story switches to their view of the adventure, and we see Aude and her friends as accident-prone bumbling detectives. Rosalie enjoys the attention as the characters continue to secretly watch each other until the game reaches it quaintly funny and inconsequential finale.

A thin plotline like this needs added substance to make it work and this comes from characterisation and charming French village setting. Vincent is neither likeable nor unlikeable, just innocuously ordinary and he plays this part to perfection. The relationship with his mother both humanises him and renders him hopelessly dependent. Rosalie is equally unfulfilled with a sad story of her own about an estranged son; she is sanguine about life and accepting of its disappointments. Aude is the spark that ignites the two hollow logs, exuberantly youthful and optimistic. Together with her excitable sleuthing friends they create several of the comic sketches that inject humour into an otherwise colourless tale. The narrative tension that sustains our curiosity comes from the hanging possibility of romance and our need for an explanation of Vincent’s obsessive behaviour. All are loners, and loneliness is a magnet for meaning and attachment.

Describing this film as a comedy is using the label in its most elastic form. There are many chuckles but few laughs: whimsy is like that. Quirky, soulful and curious are words that come closer to describing this modestly engaging tale about nothing much at all and the little-known actors rise to the challenge. The story elevates ordinariness to a higher plane and satisfies the curiosity it contrives with a simple yet charming finale.