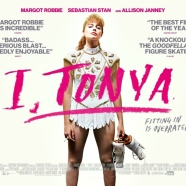 From its confessional title to inconclusive finale, I, Tonya (2017) is the kind of film that leaves you wondering why it was made. The fragmented mockumentary approach disguises a lightweight narrative filled mostly with deplorable people with few redeeming qualities. However, Margot Robbie’s compelling portrait of an abused skater-made-good turns an otherwise lacklustre melodrama into an engaging performance.

The pathologically unfiltered stage-mother LaVona Fay Golden (Allison Janney) was the kind of mother than nobody deserved. She forced her four-year daughter into ice skates and a life of verbal and physical abuse. Without ever once enjoying a mother’s praise, Tonya Harding (Margot Robbie) grew up a talented competitive figure skater who had nothing else in her life except Olympic dreams. To escape her mother, she fell in with another abuser Jeff Gillooley (Sebastian Stan) who became her husband. Despite the elite skating fraternity looking down on Tonya for her loud-mouthed brashness and being too poor to buy costumes, she competed at the 1992 Winter Olympics to win a fourth place. Retiring briefly, she mounted a comeback while her husband and his moronic friends arranged an inept attack on Tonya’s main skating rival Nancy Kerrigan. She recovered quickly yet the entire story leads to the question: what was Tonya’s role in the attack?

It is difficult to label this film: it is not a serious whodunit nor is it funny enough to call it a black comedy. The mockumentary technique leans heavily towards telling rather than showing and the narrative is disrupted constantly by actors shifting out of character and into the role of interviewee. But the effect of multiple narrators is to construct a swirling matrix of viewpoints, in the middle of which Tonya desperately struggles to find respect and belonging. Margot Robbie’s performance is outstanding. To convincingly play a girl from the wrong side of the tracks who was force-fed elite skating despite abuse from her mother, husband, sporting judges, and the media, is no small achievement. Whether the film makes a compelling case that we should care at all is another matter. With Tonya centre stage, the camera treads lightly over her abusers and leaves us guessing about her involvement in the Kerrigan attack.

If you are hoping to see some skating excitement the film will disappoint. There is a noticeable absence of narrative tension in either the characters or depicted events, yet the story engages our sympathy for Tonya. Themes like the discriminatory politics of elite sport and the social burdens of class and family dysfunction get a light airing, but it’s hard to see this as a message film. Those who remember the real Tonya and the attack will find it interesting. For others, the unusual story format and characterisations are more enough to hold your attention.