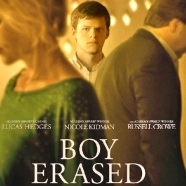 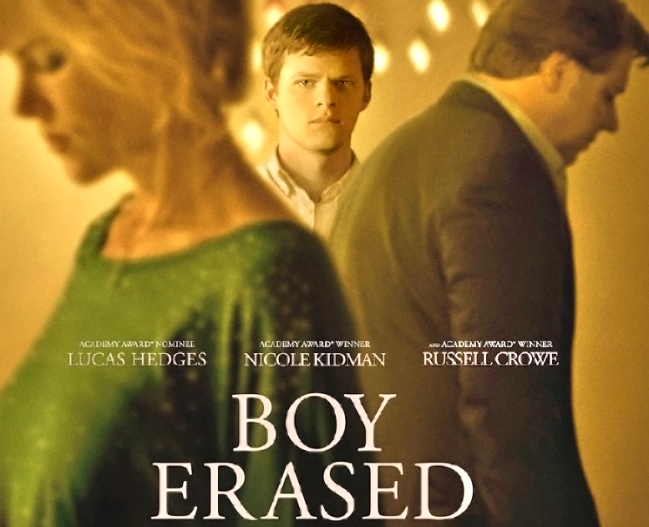 Boy Erased (2018) is one of those films that quickly make you angry because of the way it shows several evils converging simultaneously. It is disturbing to see a gay teenager manipulated by parents to alter his natural sexuality, but to see this presented as a direction from God then carried out in a commercially driven gender reassignment clinic is material for a horror movie. Worst of all, it is not only based on a true story, but a postscript informs us that 700,000 Americans have gone through this process and it remains legal in most states.

We meet teenager Jared (Lucas Hedges) on his first day at the mis-named Love in Action gay conversion camp. How he got there unfolds in a series of flashbacks, but they predictably include a hostile parental reaction when he is betrayed into disclosing his gayness. As the son of preacher and car salesman Marshal Eamons (Russell Crowe), and his compliant hairdresser wife Nancy (Nicole Kidman), Jared is told that God will never love him nor can he share a home with his parents until he is ‘cured’.

The rest of the film focuses on the camp’s strategy for conversion and Jared’s traumatic confinement of unknown duration. On day one, the director Victor Sykes (Joel Edgerton) informs participants that their ‘condition’ has been caused by poor parenting and he presses each of them to compile a “moral inventory” of people or events that caused their illness. The atmosphere turns sinister when the group is expressly forbidden from telling anyone, including parents, about what is discussed. Those who prove difficult to ‘cure’ face the possibility of doing the extended one-year program, and the camp’s commercial interests ensures that the facility remains full.

As the film is the memoir of a camp survivor we know that Jared will be OK so the narrative tension curve rarely rises. The link between conversion treatment, depression, and suicide is given a nod, and there is an assurance from a doctor that homosexuality is not a sickness. However, there are many unexplored human rights issues about extreme conservative religious efforts to brainwash young people into a life of shame and repression. These are left off-screen and the opportunity to expose advocates of the practice is lost. Gone also is the chance for an investigative ‘follow the money’ narrative. Jared mentions to his mother in barely a sentence that the longer he stays the more she pays, an issue that is surely worth more attention.

With big-name actors, one might have expected a brave examination of this odious violation of human rights, but the film has instead chosen to step lightly. Despite these reservations, it is a well-made, important, and engaging film that shines some light in a very dark place.