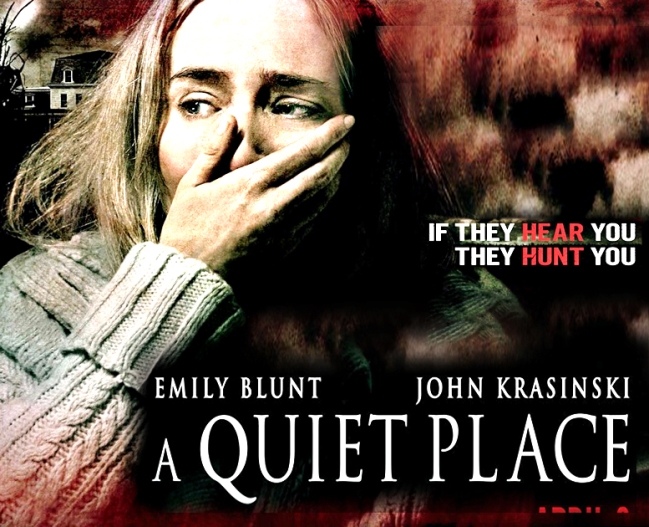 It’s hard to find a good horror film. You would think that as fear and love are universal polar opposites it would not be that difficult to work them into a plausible plotline that generates terror, or at least surprises. But alas, even with all the digital effects at filmmaker’s disposal, most of today’s horrors fall back on slimy-looking creatures that want to eat you. A Quiet Place (2018) is yet another example of this oeuvre.

The ‘future post-apocalyptic dystopia’ is the standard narrative framework for depicting a world without order or logic and it is the mainstay of this film. We are not told what happened, but it has devastated humanity and there are few survivors. In the film’s opening scenes, a family forages in an abandoned supermarket for survival essentials. They tiptoe in silence and communicate in sign-language (which we follow in sub-titles). We soon glean that the devastation has been caused by hidden predators who move at the speed of light and attack lifeforms that emit sound. As the family returns to their fortified dwelling we see an unfortunate example of how effective the creatures can be when silence is broken.

The rest of the film strings out the ‘deadly silence’ theme into a variety of situations to show how resourceful the family can be in coping with ever-present danger. They lay trails of sand to deaden footsteps, muffle solid objects, and have built a soundproof bunker for the imminent arrival of a new baby. The husband and wife team of John Krasinski and Emily Blunt (who are also married in real life) work as best they can with the material they have, but the sign-language communication feels mechanistic and their pantomime performance of fear unconvincing given the scale of peril they face. A sub-plot around a rebellious teenage daughter has all the hallmarks of a narrative filler to give the film more texture while the prolonged silence becomes louder and louder as the film wears on. By mid-way the cast have exhausted their repertoire of terrified expressions, so the rest of the film is repetitive and too long.

A healthy box-office result suggests that many horror fans will disagree with these comments. While the central premise has some novelty, the use of silence to create an atmosphere of terror is hardly original; neither are the digital beasts. The film’s marketing hype concentrates on the power of silence, but this is a distraction from a conventional ‘slimy creatures’ format. Like all horrors, it must stand or fall on the impact of its climax. Unfortunately, the ending is telegraphed well before the final scenes and played out as imagined. So, the search for a good horror continues.