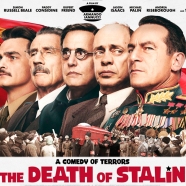 Political satires are a devious genre for many reasons. They use black comedy to mock their subject but are not always clear about who or what that subject may be. The devilishly dark British-American-French film The Death of Stalin (2017) is ostensibly about the 1953 demise of one of the world’s cruellest despots, Joseph Stalin. But when you look closely, you find unmistakable parallels with despots elsewhere

The film quickly shows a Stalinist Russia that is ruled by fear, where no Moscow apparatchik can be sure of living to the end of any day. Having jailed or killed the nation’s best doctors, Stalin’s stroke is pure karma. His bodyguards outside hear the mighty ruler crash to the floor but were commanded not to interrupt him under any circumstance. As he lay in a puddle of his own urine for several hours, his Central Committee henchmen enter the office one by one to profess their devotion but do nothing. As the tyrants-in-waiting Beria, Malenkov, Khrushchev, Zhukov, and Molotov join the gathering, it is clear that nobody wants Stalin to survive but all are terrified he might live to take it out on them.

As Stalin fades away, the jockeying for succession between the aspiring leaders escalates. Nobody trusts anybody, and everybody conspires to eliminate the others. Meanwhile, the population begins compulsory mourning and civil unrest is quelled with mass shootings. By the time of Stalin’s funeral, Committee members have plotted and double-crossed each other so many times that nobody knows who will survive. Fake news and information leaks by conspirators are used to frame multiple assassination plots until Khrushchev is the last man standing. As he assumes the role of Russia’s Supreme Leader, he is watched from the wings by the up and coming Brezhnev who will soon take his place.

All of this sounds like well-documented Russian history, so how is it a comedy? There is a delicious irony in the meticulously constructed and authentic-looking mid-1950s palatial Russian settings and the cast of actors with outrageously exaggerated British, Irish, Scottish and Welsh accents. The intelligently funny one-liners are delivered with forensic timing to portray Russian politics as stranger than fiction. It is no wonder that the film is banned in modern Russia; the callous disregard for human life and the incoherently ridiculous maneuvering for the top job speaks volumes for the way Russia’s political process operates. If this is not enough to crack you up, a more sombre insight is that the petty posturing and chaotic decision-making looks contemporary.

Students of Russian history may wince at the disrespect shown for an historical era in which so much carnage can be traced directly to Stalin or the suggestion that the Stalin-Khrushchev-Brezhnev triumvirate has transitioned to the Putin era. But this is not a film for serious political discourse; rather it is a lampooning of the political culture existing in many nations that, some may say, has echoes in today’s America.