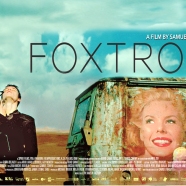 The theme ‘war is absurd’ has become a cliché that tests the creativity of many a filmmaker. How many ways can you represent the random chaos of shattered lives and senseless destruction?  The emotional rollercoaster Foxtrot (2017) hits the high-watermark in originality for the way it deploys grief, social critique, and absurdism to show a different side of war.

The film’s four acts defy the conventions of linear storytelling. In the opening seconds, a mother (Sara Adler) sees three soldiers at the door and before they can speak she collapses to the ground. With military precision, the doctor among them administers sedation and tells the father (Lior Askhkenazi) she will sleep for five hours; that’s usual, they say. When a son has fallen in the line of duty they expect the father to cope. They leave; another comes to plan just another funeral; then alone, the father furiously paces like a caged beast, crushed by his own emotions. In five hours they return with totally different news.

That plotline alone could fill a movie, but it is merely the first step of an absurdist dance with chaos that goes forward, across, back, then returns to the beginning. In the second act we meet the very much alive son Jonathan (Yonaton Shiray) who is stationed on an isolated checkpoint where the only intruders are camels that have trained the guards to open the boom-gate to let them pass. Bored out of their minds, the four teenage warriors tell each other stories, punctuated by Jonathan’s memorable foxtrot dance with his rifle as partner. The third and final acts complete this case study of random chaos; they include a scene one year later where the mother and father commiserate a tragedy and a dissolving marriage. The final seconds of the film match the opening in the way they erupt with the unexpected.

Undoubtedly, this film is anchored by the first 45 minutes in which Lior Askhkenazi gives a tour-de-force performance of going to hell and back. It is also a forensic satire that is beyond war clichés and that has infuriated the Israeli Military establishment. So much is being said in this film, with so few words spent. Small moments are jarring: like a father being told casually that his fallen son was promoted posthumously, as if he is worth more dead than alive, or the mechanically detailed way the military deals with death and bereavement. The camerawork and colour palette superbly set the mood of each act, and the asymmetry of the narrative reflects an alternative and absurdist universe in which war is normalised.

This is powerful cinema, the kind that can sweep you up with its characters, emotions, and story. Then, at the end of the film when the dance is done, you are left in disbelief at the banality of humanity. Watch for Foxtrotin Best Foreign Film award.