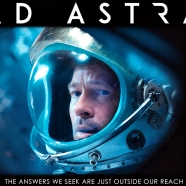 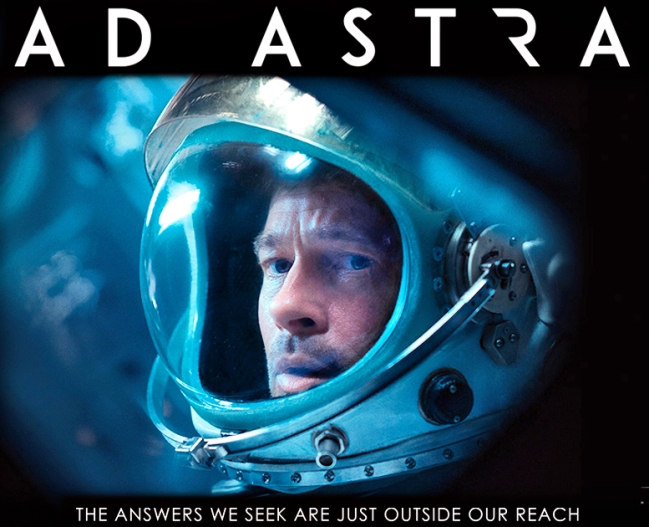 Some space movies fill you with awe at the vastness of their domain, while others feel claustrophobic. How you react to Ad Astra (2019)  will depend on whether you go along with it’s inter-galactic pursuit of a menace to earth’s survival or you become immersed in the film’s psychological drama. These twin-storylines do not always sit well together.

The plotline is simple: Roy McBride (Brad Pitt) is an elite astronaut who has spent his career in the shadow of his famous space pioneering father H. Clifford McBride (Tommy Lee Jones). Three decades ago, Cliff led a mission to find life in distant galaxies and has not been heard of since. Space Command have intelligence that he is still alive and poses an existential threat to mankind. Roy has been secretly recruited to hunt his father down and eliminate the threat.

Viewers get two very different movies for the same ticket: a sci-fi chase with enough digital effects to please the most demanding techno-obsessive, and a space-opera framed around the Freudian theme of father-son love (or its absence). Neither movie fills its potential, and each is a distraction for the other. Roy dominates screen time as both protagonist and narrator. This might have worked except that the elite astronaut’s pulse rate flatlines below 80 bpm, which is mirrored in the film’s tension curve (except for a five-second shot of a tear rolling down his face when his father tells his that he never cared about him).

Hoping to load intensity into the Freudian theme, the cameras spend far too much time gazing into Roy’s vacant face as he grapples with the moral dilemmas that Space Command has thrust upon him (including patricide). This filming style becomes tiresome when it is applied to most of the cast, except for the feral space-lab monkeys whose fate will alienate animal rights supporters. If the photography was half as exciting as some other recent extra-terrestrial films, the depiction of Ad Astra’sinterior emotional space might have provided a poignant contrast. Instead, it imparts a claustrophobic feel to both of the film’s twin storylines. Brad Pitt fans will disagree, but it’s hard to imagine a more wooden hero.

There are several scenes of infinity that we come to expect from space movies and lots of shiny steel with buttons and switches and flashing lights to remind us that space exploration is at the front edge of technological innovation. But that’s about all this moderately entertaining film achieves, despite being hailed as the space epic of the year.