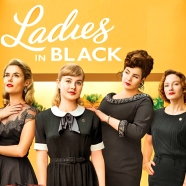 Capturing the swirling currents that shape national culture is a challenge for any film, but the coming-of-ageLadies in Black (2018 )meets this challenge. It is one of the best recent Australian films, compressing into one storyline what Sydney life was like in the late 1950s.

Based on Madeleine St. John’s1994 novel, the film blends diverse themes like feminism, class and racial difference into a cultural mosaic. The focal point that holds the pieces together is the women’s dress section in Sydney’s leading department store. Wide-eyed ingénue Lesley (Angourie Rice) wins a summer job while waiting to learn if she can enter university. Her modest background is obvious: her adoring house-bound mother (Susie Porter) dutifully serves her benignly sexist father (Shane Jacobson) who loves his beer and dinner cooked on time. In case we miss the class and feminist themes, he grunts “no daughter of mine will ever go to a university”.

As in all coming-of-age tales, Lesley’s view on the world is profoundly altered by the people she meets. Miss Cartwright (Noni Hazlehurst) is the stern but kind supervisor who sees a better future for girls like Lesley: “there is nothing more wonderful than a girl who is clever” she swoons. Anglo-Saxon homogeneity is shattered by the presence of Serbian ‘refo’ Magda (Julia Ormond), whose sassy sense of European style helps sell the most expensive dresses. She introduces Lesley to a world of cultural refinement starkly different from what the teenager has known. Other sub-stories include a woman desperate to start a family but whose husband is sexually repressed, and another with a dark past who finds romance with a ‘new Australian’.

Like any mosaic, the pieces are dwarfed by the overall pattern and purpose they serve. In different directorial hands the sub-stories could easily have been a melange, but instead they form a coherent portrait of Australia’s maturing nationhood at the time. The sets, fashion and colour palette are wonderfully evocative of the period, while the scenes of high-street shops, domestic interiors, newspaper production and city tramways are among the most authentic-looking you will find. With an outstanding ensemble cast, the key production values are uniformly top-shelf although the performances of Angourie Rice and Julia Ormond are pivotal.

Ladies in Black triumphs in the way it represents our collective memories with emotional connection. As they are the memories of older Australians, overseas audiences or younger people may not recognise them or understand how they shaped modern Australia. Some may even raise eyebrows at the invisibility of Indigenous people, but this was the reality of the times. Despite such considerations, this film is entertaining, heart-warming, and a visual feast of nostalgia.